Two of the top killers, cancer and heart disease, might be linked by obesity and chronic inflammation and stress and could explain worse outcomes for Blacks in both diseases, researchers at Medical College of Georgia at Augusta University and Paine College said. 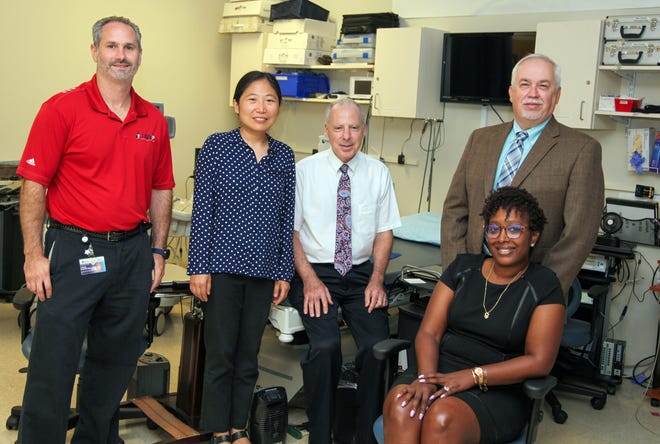 They are exploring those issues through a new $11 million American Heart Association Strategically Funded Research Network that includes other centers at Boston University, the Medical College of Wisconsin and the University of Pennsylvania. MCG will be looking at the link between heart disease and certain cancers and trying to answer why many patients develop both and why the outcomes are worse for Blacks.

"We've known for a long time there are connections between the two but there is less known about the health disparities," said Dr. Neal Weintraub, chief of cardiology and associate director of the Vascular Biology Center at MCG, who is a principal investigator on the grant.

Part of that has to do with what are called social determinants of health, such as access to healthy foods and places to exercise, he said.

"We've known for a long time that African Americans or people of color have been disproportionately more affected with these illnesses," said Dr. Anna-Gay Nelson, assistant professor of Chemistry at Paine. Blacks are more likely to have living conditions, such as neighborhoods that have more exposure to air pollution, that would increase their risk of worse outcomes, she said.

"That is the environmental justice factor," Nelson said.

There is also a link between the two diseases, a field of study known as cardio-oncology, where one may lead to the other, Weintraub said. Part of the study will be looking at cardiac dysfunction in newly diagnosed cancer patients.

"What we are finding is there appears to be a very rapid decline in cardiovascular function, which in part may be related to (environmental factors)," Weintraub said. "And in particular things like severe stress. You must recognize that the stress of having that diagnosis may differ depending upon your circumstances."

If a patient doesn't have health insurance, doesn't have a stable job, can't afford to take time off for treatment and is worried about how to pay for care and support a family, it can be far more stressful than for those patients, he said.

Obesity is another obvious link as it is a risk factor for both cancer and heart disease but it doesn't affect everyone equally, Weintraub said. Obesity is a source of chronic inflammation that can lead to both diseases but it appears to be worse in Blacks, he said.

"African Americans typically have a more pronounced inflammation even independent of the level of (obesity)," Weintraub said. "So that is one of the biological factors that we are looking at."

Another is a mutation in a gene known as the Duffy antigen receptor for chemokines, which creates a protein that is carried on the surface of red blood cells, and helps those cells tamp down inflammation. About 70% of Blacks carry this mutation and lack this gene expression, Weintraub said.

"People that lack this receptor, lack expression of it on their red blood cells, typically have higher levels of inflammation," he said. "That's what we're studying in terms of the theory about the cardio-oncology risks."

The gene has already been identified in other research as a tumor suppressor for cervical and breast cancer.

One part of it will be a population study that look at heart disease patients and their risk factors for cancer development, which is often overlooked in those patients, Weintraub said. His hope is to establish a telehealth program that could offer cardio-oncology expertise.

"In the rural parts of the state in particular the cardiologists don't have the expertise to do this," Weintraub said.

Part of the grant will also allow Paine students to have an undergraduate internship to work along MCG researchers on these issues.

"What we're seeing with a lot of our students, a lot of their parents or family have developed cancer, they have heart issues," Nelson said. "So we're trying to move from the side of them being afflicted to getting to the forefront and being a part of the research, part of these new ground-breaking events, by partnering with MCG and AU."

That will also help get more of them into those fields, where diversity is lacking.

"It's an actual pipeline where they are being trained on these different illnesses that they are more affected with," Nelson said. "This is more important because these are illnesses that are affecting our community."

It could also help build back trust in medicine, in research, if those providing the care and doing the research are more diverse, she said. And it will be good for those students, Weintraub said.

"Hopefully it will empower them," he said.

"It will be enlightening and empowering," Nelson said.