Paine College's Acting President, Cheryl Evans Jones and Director of Athletics, Selina B. Kohn announced today that Paine College will be adding Men's Volleyball as one of its sponsored sports during the 2020-2021 school year. The addition of Men's Volleyball was announced at a press conference on the Paine campus, along with the news that Paine has received a $150,000 grant to Lions Athletics to support the new program.

"Paine College is excited about the opportunity to be on the leading edge of HBCU's sponsoring men's volleyball. When Director Kohn brought us this opportunity, we learned that boys' volleyball is growing rapidly all over the U.S. It was also interesting to learn men professional volleyball is the 3rd most popular sport in the world and it is by far the fastest growing team sport in America for high school boys," said Dr. Cheryl Evans Jones. We expect men's volleyball will be popular with our students and faculty. We also expect to see more enrollment applications from students from around the country and abroad because of the popularity of volleyball. We are excited about this opportunity and bring the same "Lion Pride" to this new sport as we do to all others. I would like to thank our former President, Dr. Jerry L. Hardee and Mrs. Selina Kohn, our Athletics Director for the role each played in securing this opportunity for Paine College."

SIAC Commissioner Greg Moore announced that a total of six colleges from the SIAC, all HBCUs, will be announcing the addition of Men's Volleyball. With two announcements that took place yesterday, and another that took place this morning, two more press conferences at two other SIAC institutions adding Men's Volleyball are scheduled Sept. 5-6. A total investment of $1 million is being made ($600,000 from First Point Volleyball Foundation and $400,000 from USA Volleyball) to support the six colleges and the league in starting the sport.

Anthony Holloman, Chairman of the SIAC Ad Hoc Committee on Men's Volleyball also spoke at the press conference. "We are going to keep meeting as a group of six Athletics Directors and various support organizations of the volleyball community in order to make sure all six programs get off the ground well and thrive," Holloman said. "I want to thank and congratulate Director Kohn for this exciting day for Lions Athletics."

"We are so pleased to make a gift to Paine College. President Evans-Jones and Director Kohn are committed to athletics as a way to build campus community and a way to attract increased enrollment to the college," said Wade Garard, CEO of First Point Volleyball Foundation. "Boys volleyball is on the rise in South Carolina and Georgia, in the Southeast and around the country. The sport will be a great fit for Paine College."

Selina B. Kohn has been the Director of Athletics since July 2014. Prior to her post as AD, she served as the senior woman administrator for the department, as well as head volleyball and women's basketball coach for the Lady Lions. In 2014, Kohn was honored at the NCAA Convention as one of two SIAC former student-athletes selected to be part of the 49-member NCAA Division II 40th Anniversary Tribute Team. The award celebrated not only Kohn's dominance as a Division II athlete at Albany State, but also her continuing legacy as a coach and administrator within Division II athletics.

"We all want more opportunities for young people in this country to compete in collegiate athletics," said John Speraw, head coach of USA Men's National team and UCLA's head coach. "When we founded the First Point Volleyball Foundation, we envisioned supporting growth in NCAA DII. Selina Kohn has been terrific in committing to exploring this opportunity. I know one of our board members spent time with Dr. Hardee in the spring. It is exciting for us to see men's volleyball becoming a reality at Paine College."

About the Southern Intercollegiate Athletic Conference

Founded in 1928, USA Volleyball is a non-profit organization recognized by the United States Olympic Committee (USOC) and the International Volleyball Federation (FIVB) as the National Governing Body for the volleyball disciplines of beach, indoor, sitting, snow and beach ParaVolley in the United States. With more than 370,000 registered members, USA Volleyball conducts national championship events, coaching and referee certification programs, and grassroots development across all disciplines in a lifetime sport in which all can participate. USA Volleyball's teams have won an Olympic medal in every Olympic Games since 1984, four Paralympic medals since 2004 and numerous World Cup, World Championship and Continental Championship titles. For more information on USA Volleyball, visit www.usavolleyball.org. #PathtothePodium

About Boys' and Men's Volleyball in the United States

Boys' volleyball is exploding. It is the fastest growing team sport in the United States for high school boys, growing at 22% over the last five years. The 2nd fastest growing sport grew by only 10% and football decreased 9% over the same five-year period. With 63,563 boys playing high school now it is projected that 100,000 boys will be playing by 2026. Minnesota added 1,000 boys' volleyball players and 51 high school teams in the last two years alone. Colorado just officially sanctioned boys' high school volleyball and sanctioning initiatives and pilots are underway in 18 additional states. New Men's Volleyball programs have been initiated in 80 universities in the last five years alone – mostly at the DII, DIII, and NAIA levels. In 2018, First Point Volleyball Foundation provided Saint Francis College- Brooklyn (a Division I institution) a $100,000 grant to add Men's Volleyball beginning in 2019-2020. 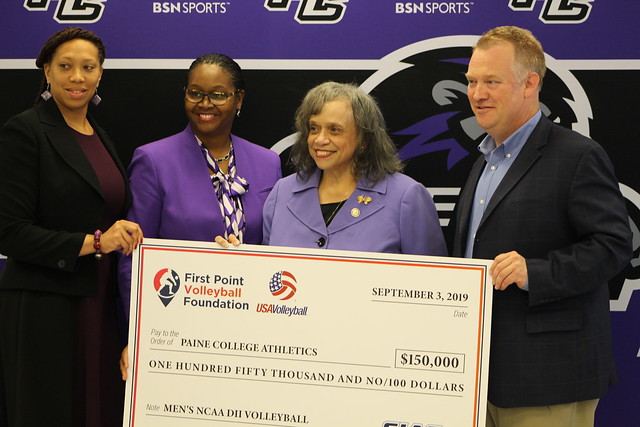