Several times per day, Briana Hines 16' casts her vote for Paine College to win the Home Depot Retool Your School $50,000 top prize. She seizes every opportunity to vote from multiple devices while waiting in long lines, during lunch breaks, and even during family gatherings. As she tweeted another vote, she declared, "I'm all in for PC." Currently, Paine College holds the Number 2 slot sandwiched between Fisk University and its sister school Lane College in Cluster 3.

"This is not going to be a breeze race," commented Helene Carter who will enter the Home Depot grant application for an outdoor facility built for student-led gatherings and celebrations. The entire Paine Family will have to work together to hold the number 2 slot and work even harder to give Fisk a run for the money. Carter said while casting her vote on Instagram, "We are in this race to win the coveted $50,000 top prize although Home Depot will award several consolation prizes. "We got this, but we have to work together to cross the finish line with the prize in hand."

Provided that the College lands among the top 3 slots in the third Cluster at the conclusion of the voting cycle on April 14th, Home Depot will underwrite Paine's campus improvement project for $50,000.

"This year, we are going to finish in the money," said President Jerry L. Hardee who begins a 7:00 am workday by casting his vote. Home Depot will announce the winning schools in April. The College will have until December 2019 to utilize the $50,000 Home Depot gift card to complete the approved project.

"Without further ado, we invite the Paine community of faculty, staff, students, alumni, trustees and friends to cast their vote several times per day now through April 14," said Carter. Cast your vote at www.retoolyourschool.com/vote, select cluster 3, scroll to the Paine Logo and click. It's that simple. Go the distance, make your vote count twice as much on social media. Simply copy and paste the hashtag #Paine_RYS19 and vote on Twitter and Instagram.

Can we count on you? Are You All In?

Your Vote counts twice as much when you vote on Twitter and Instagram - #Paine_RYS19 As of March 12, 2019, Paine holds the Number 2 slot in Cluster 3. Let's advance to Number 1. 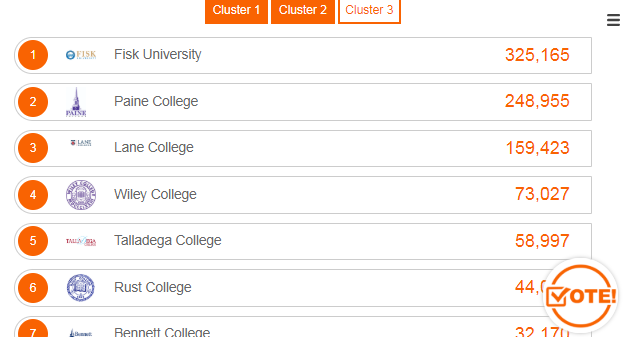