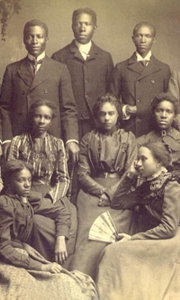 On November 1, 1882, the Paine College Board of Trustees, consisting of six members, three from each Church, met for the first time. They agreed to name the school in honor of the late Bishop Robert Paine of the MECS who had helped to organize the CME Church. In December, the Trustees selected Dr. Morgan Callaway as the first President of the College and enlarged the Board from six to nineteen members, drawing its new membership from communities outside of Georgia so that the enterprise might not be viewed as exclusively local.

Bishop Holsey traveled throughout the Southeast seeking funds for the new school. On December 12, 1882, he presented the Trustees of Paine Institute with $7.15 from the Virginia Conference and $8.85 from the South Georgia Conference. In that same month, Reverend Atticus Haygood, a minister of the ME Church South, gave $2,000 to support President Callaway through the first year. Thus, a $2,000 gift from a white minister of the Methodist Episcopal Church South and $16 raised by a CME minister – penny by penny from former slaves - became the financial basis for the founding of Paine College.

In 1883, a Charter of Incorporation for The Paine Institute was granted, and the Trustees elected Dr. George Williams Walker as its first teacher. In January 1884, classes began in rented quarters located on Broad Street in downtown Augusta. On December 28, 1884, the Reverend George Williams Walker was elected President of Paine Institute following the resignation of Reverend Callaway. In 1886, the College moved to its present site on Fifteenth Street.

The year 1888 was a very significant one for Paine College. Reverend Moses U. Payne, an MECS minister from Missouri, gave $25,000 to Paine for the endowment. Also in 1888, Trustee W. A. Candler presented a resolution to the Trustees authorizing President Walker to employ John Wesley Gilbert, Paine's first student and first graduate, to become the first Black member of the faculty. The hiring of Mr. Gilbert launched Paine's continuing tradition of having a biracial faculty. President Walker died in 1910 after having headed Paine for twenty-six years. The Paine Institute began with a high school component and gradually developed a college department. Initially, advanced students received special instruction on an individual basis, but by 1903 sufficient college-level work was provided to justify changing the school's name to The Paine College. Paine continued its high school department until 1945, because there was no public secondary school for Blacks in Augusta until that year.I-3 Source: Paine College Catalog and the Internet (General\History) Under the leadership of President Edmund Clarke Peters, 1929-1956, Paine College was accredited by the Southern Association of Colleges and Secondary Schools as a Class "B" institution in 1931 and then as a Class "A" institution in 1945.

President E. Clayton Calhoun served as President from 1956 to 1970. During his leadership, Paine was approved by the University Senate of The Methodist Church in 1959, and the College was admitted to full membership in the Southern Association of Colleges and Schools in 1961. Dr. Lucius H. Pitts was elected President of Paine College in 1971. He was the first alumnus and first Black President of the College. He died in his office in 1974. Dr. Julius S. Scott, Jr. served as President of the College on two separate occasions: 1975 to 1982 and 1988 to 1994. Paine alumnus, Dr. William Harris, served during the period of 1982 to 1988. In 1994, Dr. Shirley A. R. Lewis became Paine College's first female President. Dr. George C. Bradley was appointed fourteenth President of the College on January 1, 2008 and served until September 2014. The Board of Trustees appointed Dr. Samuel Sullivan Interim President in September 2014 and later elevated Dr. Sullivan to President in June 2016.

In June 2017, the Board of Trustees appointed Dr. Jerry L. Hardee to lead the College into a new era.  Within nine months of Dr. Hardee's tenure, the College witnessed over $1.5 million in renovations, revitalized signature fundraising events that were on hiatus, re-activated the Alumni Relations Office and the College's Bookstore while introducing new publications and offerings for students. Dr. Jerry Hardee served until June 2019.

Dr. Cheryl Evans Jones was named acting President in July 2019 and President in October 2019 at the fall meeting of the Board of Trustees.

The College remains a liberal arts, coeducational, church-related school, gratefully related to its founding denominations and open to all.